The Faces of Construction That Cares: Meet Jay

How Jay First Got Involved in Construction:

If you ask our Construction Supervisor, Jay, he’ll describe his exposure to construction throughout his youth as “generic,” noting that he would help his Dad or Grandfather build a shed, do deck repairs, or other things along those lines.

As time marched on, Jay “was confronted by a couple different opportunities to get into the business, and that kind of turned into a little bit more high-end trim carpentry, cabinetry, built-ins, libraries, things along those lines.” He defines his journey as kind of going backwards. “I started from the fine stuff and moved back into framing and things of the like instead of the natural progression where you would typically start on a framing type of issue or drywall hanging issue and progress into some of the finer stuff.” Jay’s experience in high end construction came during his time in New York and New Jersey. He mainly worked in the city in New York, so obviously there wasn’t a lot of room for ground-up construction. “There’s no grass, to be blunt,” he explains, “so we focused more on fit-out jobs – both high-end residential and commercial work.”

He spent quite a few years doing this work in the second to none hustle and bustle that is working in Midtown “before redeveloping, re-upping, and moving into the agriculture end with my company, GreatGrow, which brought us out here to Pennsylvania.”

GreatGrow, which develops soil and plant amendments that increase crop yields, improve soil structure, relieve soil compaction, improve soil oxygen, and promotes the use of water while suppressing foliage and root disease, has since turned into an Intellectual Properties firm, as Jay has been “basically selling his inventions off and things along those lines.”

Jay found himself back in construction – only on the other side of the table – as a Building Code Official and Zoning Officer for Kraft Code Services for six years. “From there, it felt like the natural progression was to move away from that and get back into what I spent so many years doing in New York on the construction side of things,” says Jay.

Jay describes himself as a learner and a thinker. Although he had an element of sitework experience in the past, it wasn’t quite to the scale of the multi-family projects that he is leading with D&B Construction. “I like learning new things, so moving into the sitework and infrastructure work and these big parts of the multi-family is very eye-opening and exciting,” he explains.

“I’ve only been with the company for a bit over a year, and I have my hands in a bunch of stuff. I think just with as many moving parts that we have throughout all the different projects, that challenge to keep up with the Joneses and to make everything happen and keep everybody happy that’s pretty much what fuels the fire within me. You wake up and hit the ground running 100 miles an hour all day long.” 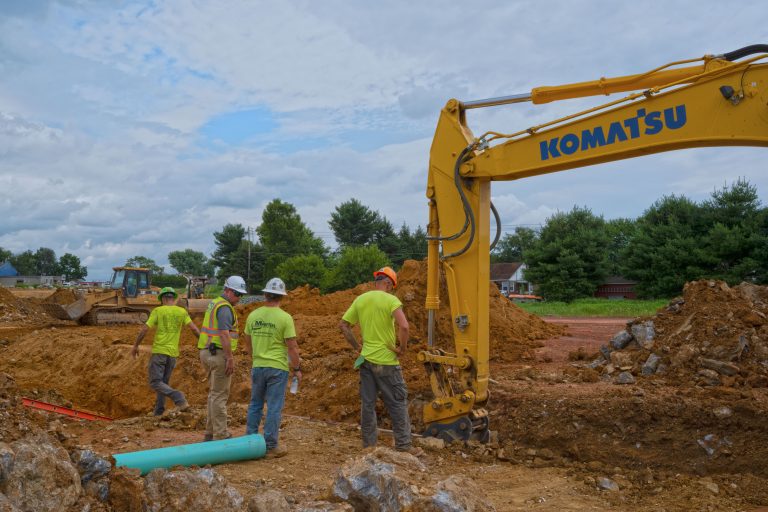 Jay Outside of D&B:

His main motivation that gets him out of bed in the morning? His family, of course, which he describes as “the most important part of my existence as a whole.” Jay and his wife have two children: Madeline and McLaen. Although his son is getting ready to go away to college soon and his daughter is about to enter high school – thus making things a lot less busy than when they were much younger – the Holmgren family is still very active.

Madeline is described by her father as a “brilliant dancer,” and McLaen, who played a lot of soccer growing up, has since transitioned over to music in his late teen years – following in his Dad’s footsteps. “He’s picked up a lot of my instruments that I held. Once COVID hit, and I told them they weren’t going to be on their screens 24 hours a day, he started running with it. He’s actually moving more towards playing the bass than the guitar like I did. That love for music has definitely been passed down there. He’s quite the guitarist, quite the bassist,” Jay says with a proud smile. A younger Jay used to write poetry and lyrics, and his son is also following in his footsteps in that regard, too, having put his first couple little pieces together, which Jay describes as “well thought out and well done.”

He describes his daughter, Madeline, as the same with her dance and her art – she draws a lot and things along those lines (just as Jay used to sketch and sculpt a bit).

“I like to think that a lot of the artistic stuff that I did when I was younger was passed down to the youngins,” he explains. Obviously – school’s always important. Jay’s wife, Suzanne, helps the kids with homework as much as possible. “It’s a day to day. You know – we’re just a family,” explains Jay, “but it makes it all worthwhile when you come home to a house full of issues – or not – to keep a smile on your face.”

Finding An Extended Family in D&B:

“I think D&B’s support structure overall is – not to throw the word / term ‘team’ around, but there is such a team structure to D&B. I’ve worked in companies and represented companies in the past where they were very fragmented. Everybody kind of worked on their own keel, not a whole lot of cross over. I do really feel at D&B you have solid relationships. If you need somebody to talk to about this, that or the other, there are people here that are genuinely interested and really nice shoulders to lean on here and there. I try to provide the same, but you know it’s definitely a family feel, a lot of support structure. If people need things, we’re there for each other.”